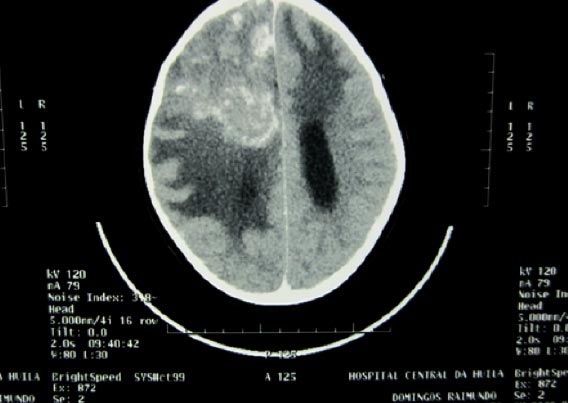 Feliciano, a 6 year old boy, was accompanied by his dad, who explained how over the last 4 months his son has lost the use of his left arm, walks with an increasing limp, and now his mouth deviates to the right side. All these signs point toward a mass in Feliciano’s brain. His father gathered 4 months wages and paid the Chinese in Lubango for a CT scan, pictured. As I described the brain tumor, Feliciano’s father burst into tears. I immediately emailed the CT scan images to the Children’s Mercy Hospital in Kansas City, but I also felt a growing lump in my throat, for we really have no means at all out here to treat such a cancer. After a few moments the father said to me, “My son is in God’s hands. Can we pray together?” and he launched into the most beautiful adoration, thanking Jesus for the privilege of these years with his son and for courage in the coming trials. As he closed the prayer, I found that I was the one in tears.