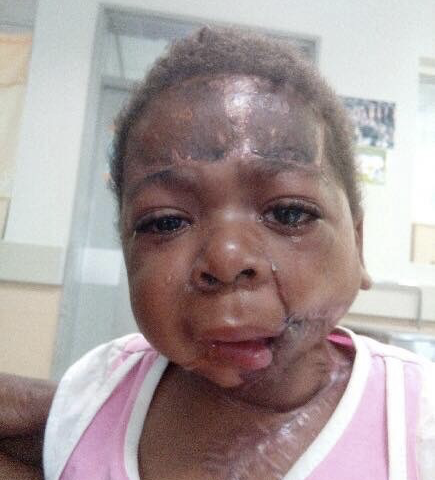 Three-year-old Valentina arrived with her parents. They came many miles, hoping that the doctors and nurses at CEML could help their little girl. Valentina’s face was distorted and deformed. A severe abscessed tooth caused an infection so deadly that her lower jaw had lost its bone density, requiring full surgery to remove it. She was literally starving to death. Dr. Annelise Olson tackled this difficult surgical case. There were few cases she could refer to, as Valentina’s abscess and bone damage was beyond anything we had seen. Dr. Olsen performed seven different surgeries. Many skin grafts were needed to repair the oral-facial damage.

Today, Valentina is at home. The surgeries and care in the hospital restored her ability to chew semi-solid foods. She has gained weight, surprising everyone!

Each case is unique. Dr. Annelise Olson and Dr. Stephen James Foster, with many years of surgical experience, are leaders, innovating with the technical knowledge  they have learned. They approach each case with compassion, caring for the whole family.

Valentina’s family came to CEML praying that they would not be turned away. Extremely poor, they could not pay for the medical care they desperately needed.

The family was not turned away. Valentina received the treatment she needed because of the kindness of many donors – more than $10,000 from our Hope Fund was used to restore Valentina.

Doar here to contribute to the Hope Fund.